Mumford and Sons in Mansfield 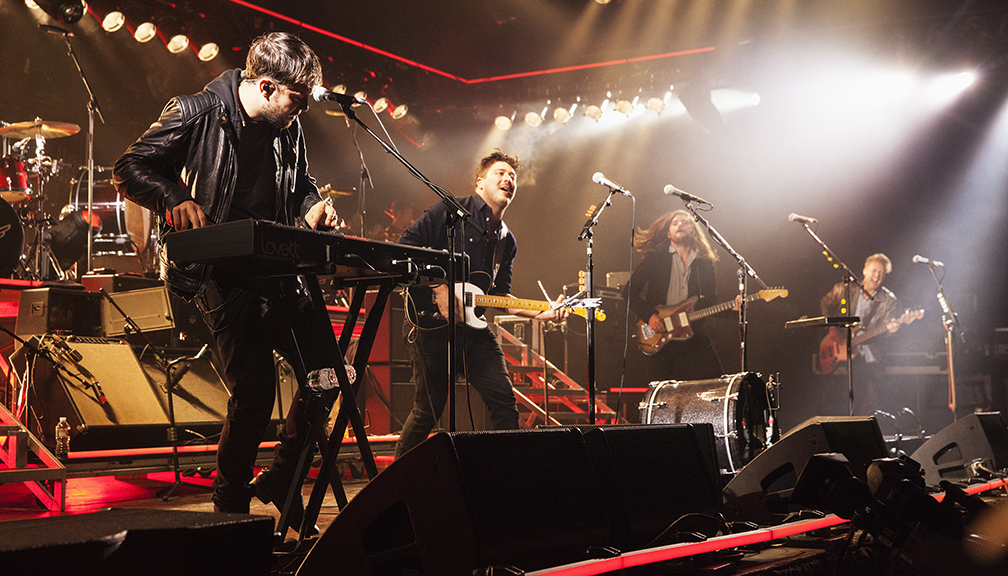 Much has been made of Mumford and Sons’ sharp departure on their most recent album, Wilder Minds, from the banjo-centric sound that initially propelled them to surprising fame and helped spark a broad folk revival in the music industry. The album, the group’s third studio release, has been met with decidedly mixed reviews both from critics and the band’s sizable fan base. Some give the Mumford’s credit for endeavoring to movie out of the pigeonhole they were being forced into, while others have questioned the direction of the move, complaining that Marcus Mumford and his mates have abandoned the sound that made them distinctive in favor of a more mainstream, guitar-driven, arena-friendly approach that has many imitators.

As they embark on a worldwide tour behind Wilder Minds, this much is clear: the new songs and old songs meld together more cohesively in live performance than one might expect from listening to the albums. At the Xfinity Center outside of Boston, third stop on what will be a lengthy, summer-long trek, Mumford and Sons delivered a rousing, two-hour, 20-song set to a capacity crowd of 19,000.

The band opened the show with a new song, “Only Love,” the stage sparely lit at the outset and the vocals understated until exploding into light and grandeur midway through the tune.This was followed by another new number, “Ditmas,” which may be the one song on Wilder Minds that sounds closest to the “old” Mumford’s. It was excellent in concert, and easily segued into “The Cave,” one of the breakout tracks from the band’s Sigh No More debut and a sure-fire crowd-pleaser.

This was the pattern for much of the show; while fully the half the set list was new material, the band never went more than two or three songs without throwing in an older, established tune. The strongest of these included “Awake My Soul,” “I Will Wait” and “Lover of the Light” – the latter of which saw Marcus on drums doing the full Mumford, practically yelling the chorus, “And I’ll be your goal, to have and to hold, a lover of the light.” The older material, not surprisingly, generated the strongest audience response, but many of the new songs – “Broad-Shouldered Beast,” “Tompkins Square Park,” “The Wolf” – were fairly well-received by the crowd.

In addition to Mumford, Ben Lovett on keys, Winston Marshall on guitar and banjo and Ted Dwane on bass, the touring band includes two drummers, two horn players and a fiddler. The area immediately in front of the stage at the Xfinity Center was an open, GA floor, which gave the band some energy and enthusiasm to feed off of.

Fans who may be concerned that the new album represents an irrevocable break from the past should rest assured that – based on their live performance, anyway – this is still the same Mumford and Sons they had come to know and love. The new songs fit comfortably alongside those from the earlier records in concert, and the infectious power of the band’s live performance remains wholly undiminished. And for those who will accept no substitute, the band does eventually get to “Little Lion Man,” midway through the encore.