Throughout his past two albums, the charismatic keyboardist has emerged as a lead vocalist—and, on his next LP, he may have also found his doubles partner.

As Marco Benevento continues to gain increasingly widespread recognition for his keyboard work with Joe Russo’s Almost Dead, his solo records have solidified a sound of their own—a percussive, melodic, highly danceable brand of indie-pop.

For his forthcoming studio album, Benevento switched things up even more than usual, teaming with producer and multi-instrumentalist Leon Michels—who is known for his own group El Michels Affair and has played in Dan Auerbach’s The Arcs—instead of simply hitting the studio with his current live band. They also enlisted Nick Movshon, a bassist and drummer who, like Michels, is associated with the Big Crown and Daptone scenes and has played with Amy Winehouse and Mark Ronson, and brought in Benevento’s regular bassist Karina Rykman to supply some background vocals.

Though his instrumental and songwriting chops have long been revered thanks to his contributions to groups like the Benevento-Russo Duo, Benevento has only just begun showcasing his vocal chops on his recent records.

“I opened up that door and it won’t go away,” Benevento says, speaking from his studio in Woodstock, N.Y. “I always sang in bands my whole life, but then I got into jazz and experimental music when I was 18-19 and abandoned the whole singing thing in favor of instrumental music. But I always sang with my family. One nice thing my drummer said about me: ‘Most singers lose their voice as tours go on, but yours just gets better.’ I was like, ‘Hm, thank you. You just made my day.’”

In 2016, I subbed for Leon in The Arcs for a few gigs. I had made a record with [fellow Arcs member] Richard Swift in 2014 [Swift]. We hung out between tours, and he recommended me, so that’s how I met Leon. When I told Richard that Leon and I were working on a record together, he was like, “I’m so glad you guys hooked up—dream team. I wanna mix it.” Unfortunately, he passed away. We had sent him all the mixes, but he was like, “I’m going through some shit right now. Gimme a second.” And he freakin’ died on us, which is really sad. I didn’t believe it. He was too close of a friend for me to think that it would actually happen. He was such a genius—I was like, “He’ll figure it out.” The record was done a long time ago, and we were really just waiting on Richard to mix it. 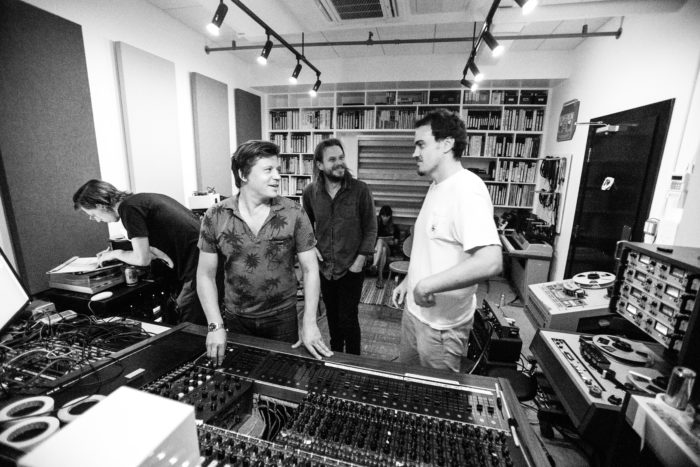 Leon and I worked on the record here and there for a year. He moved to the Hudson Valley, and his kids are the same age as my kids. He also plays tennis. I played when I was in high school and started getting into it again three or four years ago, and he said, “Are you sure you wanna play me? I’m really good.” I was like, “I’m really good, too. I was undefeated in high-school doubles.” When you play tennis with a musician friend, it can be really lame—they come with the wrong sneakers, like, “Dude! What’re you doing?” Leon played when he was a kid too, so we both have that crazy competitive edge and love hitting the ball hard at each other. Our games are pretty damn even; we go to a tie-breaker all the time.

So we’d play tennis in the morning and get our asses kicked, then we’d work on tunes in the studio. It became super fun and casual—there were no deadlines. I wasn’t in a rush. We went down to Diamond Mine in Queens, and we did five days there, then we did the rest Upstate at my place and his place. I’d been sitting with these demos for almost two years and I wanted to throw my hands up in the air and say, “I’m down to change stuff, even rerecord everything.” The record is basically Nick Movshon, Leon and I in a room. Leon played organ, I played piano, Nick played drums. We’d track the three of us together and then Nick would add bass. So the rhythm section is really one person.

I’ve always loved the sound of [Leon’s] records and the simplicity of his records, and I thought that it would be a good match for me to hook up with him. He’s a new Upstate best friend—we can go out for pizza and drink red wine and have the kids hang out. We even got his kids and my kids to sing on the ending of “Send It on a Rocket.” We were eating dinner at their house and I was like, “We should get the kids in the house and record this.”

All my other records, I just did pretty quickly by myself. This one was a collaborative effort and took two years to do. It was my favorite experience of all the records I’ve done—it’s right up there with making that record with Richard Swift. I’m a total gear junkie—I like capturing sounds and being my own producer and my own engineer. So do Leon and all those guys at Diamond Mine. We recorded it all to tape, with lots of bouncing from one tape machine to another and lots of saturation and a degrading quality to get the sound we wanted. All the demos I had were made with drum machines, and Leon—he told me he’s never done this before—wanted to get the drums to sound like a drum machine but with a real drummer. It’s funny—when I play these songs for people, a lot of them are like, “Is that a real drummer or is that a drum machine?” And I’m like, “Leon nailed it.”

Two years ago, we did a tour promoting our live album and we played some of these songs. It was nice to sit on the tunes for a while and really figure out what tempo or key we wanted them to be and what would really benefit my voice. We could figure out what feel we should use or if we want to keep the drum machine on a track. It was nice to not be in a rush. But I still worked on the album every day; I wasn’t lazy about it. It just simmered for a long time and that process sometimes results in the best songs, as we all know. And I have a whole other record on the burner already. I’m always working on tunes.