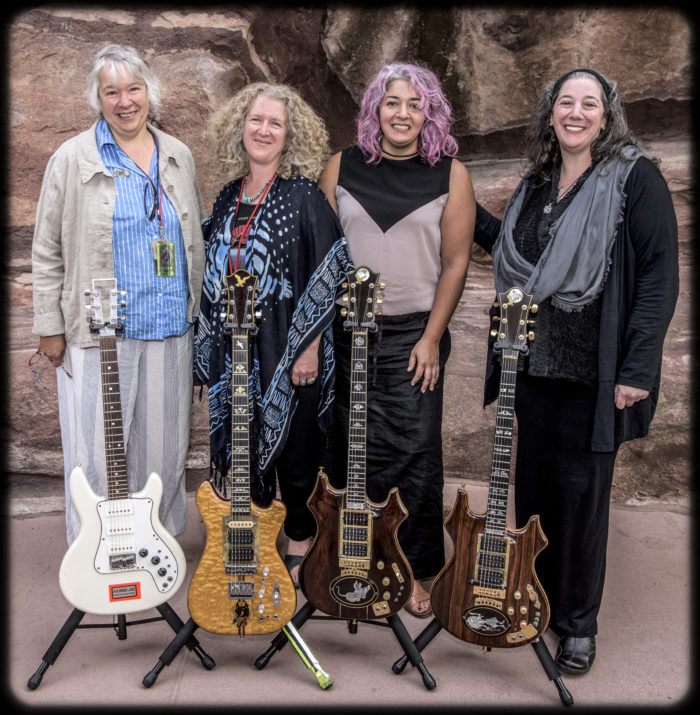 “I sincerely believe that the more people that we can expose to Jerry’s playing and the kind of person that he was, the better we can make the world. That’s what motivates me to continue to do licensing,” Jerry Garcia’s daughter Trixie reflects, as she discusses her family’s recent business ventures. “I say that after talking to so many Deadheads, who have testified to me that the Grateful Dead changed their lives.”

The family’s latest endeavor, in association with Holistic Industries, is the Garcia Hand Picked cannabis brand, which follows partnerships with Keen footwear and Tessemae’s organic sauces.

“The world of celebrity branding can be kind of a gross place, which is why we’re careful with selecting our partners,” she adds, “We’re not interested in crappy microwave color-changing Elvis cups. We’re trying to live up to a set of ideals and work with folks who understand what Jerry means to people. We want to work with folks who bring a very high level of quality and integrity.”

Before we talk about more recent developments, can you share your thoughts on Port Chester, N.Y.’s Garcia’s, which opened more than seven years ago?

I’m really proud of what we’ve done with the space at Garcia’s at The Capitol [Theatre] and the whole concept behind it. It’s a place for people to get together and still be able to connect with Jerry. It was meaningful to me because it’s a way for us to participate in the scene. I feel like we still have a relationship with the fans and are able to deliver things that delight and encourage more good vibes.

The whole vibe of the Capitol is amazing and authentic. I don’t need to come in there and tell Peter Shapiro how to interpret Jerry Garcia’s vibe. I am just kind of there to encourage all this stuff to happen. Compared to what the fans know and want to cultivate, I’m no expert. The bare-bones feel of the bar was definitely pulling from the Garcia family’s past. They ran a bar in San Francisco. There’s a simplicity with the no-nonsense, real-deal, “getto-the-good-music” feel of the space. Having it be so intimate and humble is totally cool.

As someone with an artistic background and skill set, to what extent do you like to get involved in different aesthetic decisions relative to that venue or any of your family’s collaborative projects?

All of Jerry’s kids are artists in one way or another. I went to the San Francisco Art Institute because my dad had a history there, and I was kind of looking for direction when I was younger. So I have a degree in painting from there, although it’s not super helpful in a lot of the business stuff that I’ve come into, like negotiating contracts with huge companies.

But I’ve gotten more confident as far as using my creative impulses or intuition to help guide the look and feel of some of the brand licenses and products. Some of it is just knowing my dad’s personality and what things made him uncomfortable because he was a stylish guy. So not wanting to put dumb flourishes on his face or have Jerry’s face on top of a pyramid or all these things that people have wanted to do. [Laughs.]

What other considerations are important to you when selecting a partner? It seems like there’s often a charitable component.

When it comes to celebrity branding or whatever you want to call it, Paul Newman created a great model to work from in terms of contributing to charity. Obviously, we’re not huge, but it would be nice to do something like that one day.

But when choosing partners, products and people that are gonna go out there and represent Jerry, it’s important to pick the right people. We partnered with Keen to do a line of shoes, and they have been supporting HeadCount through the Vote Love campaign, which is a get-out-the-vote campaign that we’re also working on.

We also partnered with Tessemae’s, which is an eco-conscious salad dressing company. There’s a high level of quality and integrity there, which is so important when we think about licensing something.

When you hear a pitch, to what extent can you be swayed by someone who has a deep and personal connection to your father’s music?

It can be nice, but I should also point out that it has definitely worked against some people. At times, the emotional intensity is too much and it makes things difficult. Sometimes the fanaticism is a little too extreme, and gets in the way. Certainly, for my own peace of mind, I can’t work with anyone who thinks my dad was a deity or something. We’re real people. So you’ve gotta stay grounded, stay humble, be realistic. That’s also important.

You recently announced a partnership with Holistic Industries on Garcia Hand Picked. How long have you been thinking about a cannabis brand?

It seems like a logical fit. Getting into the cannabis industry was something I was determined to do. I’ve been trying to find a partner for five or six years. We’ve met lots of people and toured lots of different places, and thought about many different ways to structure this. I wanted to get it right.

One thing that I wanted to do was fight against the stereotypes of the “longhaired stoner” and the “dirty hippie.” My very best friend is a high-functioning lawyer who’s also a pot smoker. There are a lot of people like that.

So we found some awesome partners. I’m so stoked that we found professionals who were already successful in other markets. I am also happy that we found companies that are privately owned and family run. They’re super high-end, creative, productive business people. I believe growers are artists and they need good management. They’re like musicians; they just need assistance.

So Garcia’s Hand Picked means that we are actually in there tasting and trying these products. We’re proud of them and we want to share the best of what California has to offer.

I should also point out that I’m a huge cannabis fan. Growing up, I went to the high school where 420 was coined [San Rafael High School], so there’s that. [Laughs.] I absolutely love sativas—I like getting stoned and then doing gardening work and stuff like that. I also enjoy smoking weed around people who I dig. So I will say that sampling the product is a huge perk of the gig for me. [Laughs.]

It sounds like all of these endeavors require a balance between your free-spirited nature and a need to focus on business matters. Can you talk about that challenge?

It’s a balance, absolutely. I rebelled against the Grateful Dead as a teenager. I was into hip-hop—I went out and forged my own life totally anonymously. I never socialized with the fan base or anything like that. My mom raised me, and she protected us from all of that by moving us to rural Oregon.

Also, at the end of the day, the whole world is a mystery. We are on a rock hurtling through space, and it’s all amazing. This construct of human civilization is not the end all, be all. That’s something I learned from my parents. It’s not necessarily great business talk, but my ability to detach is also crucial. It’s part of what I want to share with others—that whole inner freedom and expansiveness.

You mentioned your mom [Carolyn “Mountain Girl” Garcia, one of the original Merry Pranksters]. I know she’s been working on her memoir. Can you share a status update on that?

My mom’s memoir has become my number-one focus over the past six months. I actually call her and harass her about it pretty often. I think that it’s very important for her voice to be in the mix and very important that she is able to share how these different events unfolded—the way she remembers them. So yes, me and my sisters are working on getting those stories out of her tightly clenched fingers. [Laughs.]

I also have to plug her own parking-lot CBD brand, Mountain Girl’s Botanica. It’s very small scale; it’s just a nod to her range of influence, and how many people idolize her.

To what extent do you currently explore your own creative expressions? And in what medium do you prefer to work?

I still enjoy making art as part of my range of hobbies and skills. It’s nice to lose yourself in a piece of art. I used to do large paintings but storage got to be an issue. So I’ve gotten much smaller. I love making art but I don’t anticipate making art shows or anything like that happen. There’s so much scrutiny and I just wanna enjoy it. My sister Anabelle has a popular Instagram handle, and she loves sharing her art. She’s @bluebelle42 on Instagram.

But, for me, it’s kind of like a meditative practice. Growing up, all this visionary artist stuff—like psychedelic art, comic book art—served as my inspiration. I appreciate what’s going on with the Alex Grey scene and these shamanistic visionary artists. That’s a whole thing that wasn’t even acceptable in the fine art world like 20 years ago. It was like, “Eww, that’s folk art, what are you doing?” But now there’s a whole scene and a ton of people who are into it, and I think it’s beautiful.

Circling back to Jerry, over the past few years, The Days Between [the period between Garcia’s birth on August 1 and death on August 9] has become a significant event. This year it also served as a major platform for charitable endeavors. What is your perspective on how it has evolved?

The Days Between is obviously based off a song, and the fans took it over after Jerry died. For years, it felt like it was just this mournful period—there was this malaise and everyone was just so bummed out. So it’s important that we all have been able to transform it into a time of reflection and celebration, which has helped to bring our community back together over time.