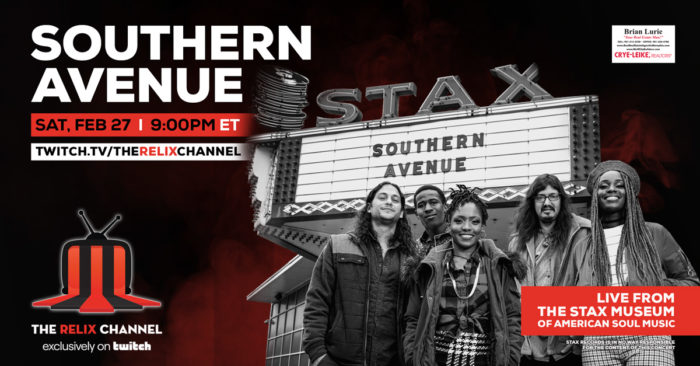 On Feb. 27, Southern Avenue will perform a livestreamed show at The Stax Museum of American Soul Music in Memphis, Tenn. The show will be broadcast on The Relix Channel on Twitch and will begin at 9 p.m. ET.

The Stax Museum has not played host to many livestreams; another performance to take place there was Justin Timberlake for the Presidential Inauguration. Southern Avenue will become one of the select few bands to livestream from the museum.

“Southern Avenue was the first Memphis band signed to Stax in over 40 years. They are an authentic representation of Memphis music and are phenomenal ambassadors of the ‘Stax sound’ and for the Stax Museum of American Soul Music,” said Jeff Kollath, the Executive Director of the Stax Museum. “We don’t normally open the museum for live music events…Justin Timberlake a few weeks ago for the inauguration and Southern Avenue are the exceptions. We’re excited to continue working with the band!”

“There is no better way to end Black history month than to play a show of our music, a mixture of soul, rock, r&b and most importantly, blues,” added Southern Avenue lead vocalist Tierinii Jackson. These are all genres originated by black Americans of African descent. And we get to do it from the original location of Stax Records, a staple in African American music to say the least. We couldn’t be more grateful to Stax Museum for  opening their doors to us and giving us this opportunity to honor all of the African American trailblazers and my Ancestors, the best way that we know how. Through song, dance, rhythm, and blues.”