“His Fearlessness as a Bass Player Was Second to None”: Warren Haynes Reflects on The Life of Allen Woody 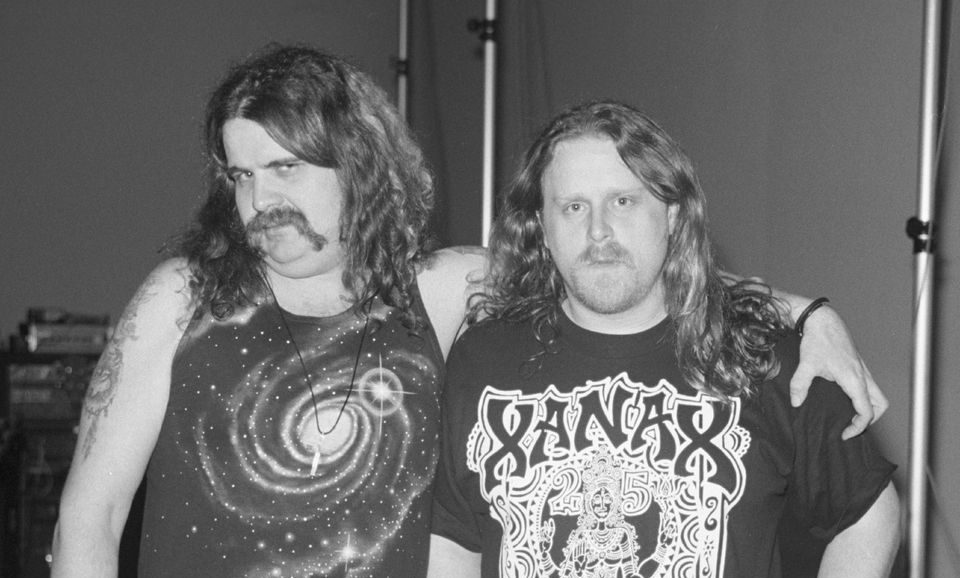 Photo by Kirk West, via Warren Haynes on FB

“We had found, in each other, a musical foil,” Haynes explains. “Musicians are fortunate, in this life, to find someone with which they share an automatic bond, musically speaking—a partner with whom they share the right amount of similar influences and philosophies coupled with the right amount of difference and contrast… So much of what happened between us on stage was a combination of instinct and telepathy combined with, again, ‘not giving a fuck.’ His fearlessness as a bass player was second to none. Playing it safe was not an option or at least not one he would ever choose. He played the way his heroes played—with a reckless abandon that made the music dangerous, as the gods of rock and roll intended for it to be.”

Allen died in August 2000 at the age of 44. He joind the Allman Brothers Band in 1989 (the same year as Haynes) and eventually stood as one-third of the original Gov’t Mule playing on their first three records – Gov’t Mule, Dose, and Life Before Insanity.

I don’t know where to start, since all of the best Allen Woody stories are ones I can’t share publicly. Like the time he climbed out on his hotel room balcony to get a good angle to take aim at the police car below (when you gotta go, you gotta go)? Can’t tell that one. Or the time he performed at Red Rocks while….? No, can’t tell that one either. Or the one where he…? Nope. I can’t really tell any of them—but they’re so damn funny! Woody was one of the funniest people I ever met. Aside from being my partner in music, and my partner in travel and adventure, he was my partner in comedy. One of the things that kept us going on the road was our incessant appetite for laughter. Believe me, when you travel as much as some of us do, laughter, possibly next to music, truly is the best medicine (and one that tends to mix well with the others). Woody’s wit was sharp, quick, dark, and ruthless. One of his many, dare I say, “talents” was sizing someone up instantly and finding an immediate, though not always politically correct, nickname for them. Like referring to the bus driver who was constantly lost as Magellan, or our friend who was always making bad decisions as Oppenheimer. Butch Trucks was Foghorn Leghorn (those of you who knew Butch will obviously get that one). More often than not the pseudonyms were based on physical similarities to a well-known character and always spot on (although, once again, I can’t share most of them publicly).

Woody was a dichotomy—or maybe a trichotomy. He was simple and complex at the same time. He was intelligent but didn’t want to appear so, for fear someone would confuse it with being pompous—a trait he despised—and although he was proud of the way he carried his “everyman” persona, he had quite a wealth of knowledge to draw from. He, admittedly, had acquired a vast amount of, what he referred to as, “facts that don’t matter.” Many of Woody’s sentences started with “Did you know that….?,” and most of the time we didn’t. Although he cared deeply about the things that were important to him he was in proud possession of the trait he most admired in others—“not giving a fuck.” None of us will forget the image of him sporting a tie-dyed tank-top with zebra-striped sweat pants tucked into brown suede, fringe, moccasin boots. A fashion statement for sure and way ahead of his time. (Did I mention that he had a purple streak in his hair in the 80’s?)

Part of the trichotomy was also a big heart that defied his grimacing look. After we got to know each other he and I both would later half-jokingly admit that we each, before we met, had expected the other to be much different than we each turned out to be, proving once again that judging someone by their appearance is never a good thing—especially someone who “doesn’t give a fuck.” So we became instant friends and comedic partners. This was soon more solidified and even magnified by the fact that we shared a tour bus (often with Gregg Allman) where the camaraderie and the laughter were constant.

But more importantly we had found, in each other, a musical foil. Musicians are fortunate, in this life, to find someone with which they share an automatic bond, musically speaking—a partner with whom they share the right amount of similar influences and philosophies coupled with the right amount of difference and contrast. If and when this happens, a relationship is born that starts with an uncanny ease to musically communicate, and if given the time to grow, can go way beyond that to becoming something much larger than the sum of the 2 parts. I consider myself very fortunate to have had this with several musicians during my life but it’s obvious to most music lovers who were on the receiving end of what Woody and I shared that there was something special there from the beginning. More than 1200 shows later it had grown to a place that even the best musical relationships only get to over time.

So much of what happened between us on stage was a combination of instinct and telepathy combined with, again, “not giving a fuck.” His fearlessness as a bass player was second to none. Playing it safe was not an option or at least not one he would ever choose. He played the way his heroes played—with a reckless abandon that made the music dangerous, as the gods of rock and roll intended for it to be. His absolute favorite thing about playing music was being lost in the “danger zone”—riding the wave, not knowing where the music was going from moment to moment. He pushed me and challenged me, from a musical standpoint, in a way that could force me, at any time, to step outside of my comfort zone and shift into yet a higher gear that had not existed prior to the moment we were in. Never mind what was rehearsed or mapped out. “Let’s go here!” And at the drop of a hat, we’d turn on a dime and we’d go there. For Woody, music that didn’t accommodate that approach was not worth playing. In his mind, all music should reflect the personalities of the people playing it, otherwise it was just “muzak.”

The day Woody died the first 2 phone calls I received were from friends who had obviously been through what they knew I was currently feeling. The first one was from Phil Lesh who said “I know what it’s like to lose someone with whom you shared a profound musical connection”. These words would resonate. The next call was from Gregg Allman who Woody and I had traveled around the world with. Gregg mostly focused on how much he loved Woody and how much he was gonna miss him but he restated the obvious—that Woody and I were like brothers. In a later conversation I mentioned to Gregg that I was having dreams where Woody was there and still alive to which he responded, almost nonchalantly, “You’re always gonna have those.”

That day began a dark time in our lives. I attribute being able to get through such a dark time, largely, to the comfort and encouragement offered from so many friends and fellow musicians…far too many to acknowledge here. The future of Gov’t Mule was up in the air, to say the least. Anyone who’s been in a similar situation knows that it’s hard enough to continue, in any band, after losing a founding member but I would suggest that in a trio it’s even harder. Each member in a “ power trio” is almost irreplaceable. My first inclination (and Matt Abts’ as well) was to call it quits and it took several months for me to be able to even consider moving forward. Thankfully among the numerous voices of encouragement I received, many were from others who had suffered similar losses—people like Dave Grohl, James Hetfield, Dave Schools, and John Popper—all who were saying that even though it feels, right now, like you can’t do it, you have to keep the music alive. I am forever grateful to everyone who helped us find the strength, desire, and courage to keep it going, especially all the musicians who came on the road when we didn’t know where we were headed and those who joined us for the Deep End sessions which allowed us to find our way to becoming a band again. The power trio, Gov’t Mule, died with Allen Woody but his ever-present spirit has been with us throughout this entire journey. Those of you who really knew Woody know that he would never have been happy resting on his laurels. The three studio records we recorded as the original trio were each different from the other and he wouldn’t have had it any other way. I often wonder which musical directions we would have explored together had he lived to make our fourth, fifth, and sixth albums and beyond. That’s something we’ll never know but I do know that his presence has been part of every decision we’ve ever made and every musical path we’ve ever pursued.

I also know that he made a deep impression on those who were fortunate enough to have known him, along with those who only knew him through his music. I’m continually hearing from fans and casual friends who tell me of meeting or spending time with Woody. They all seemed to take away the same thing—that he was, in addition to being a great musician, a genuine human being who made whomever he was talking to feel like they were the only person in the room. Having witnessed this act of kindness countless times myself I must say that that’s one of the things I took from him that I try to carry forward. We’re only on this earth for a short time and it’s just as easy to be a “good guy” as it is to be an asshole. I am certainly not alone in saying….I miss you Al.