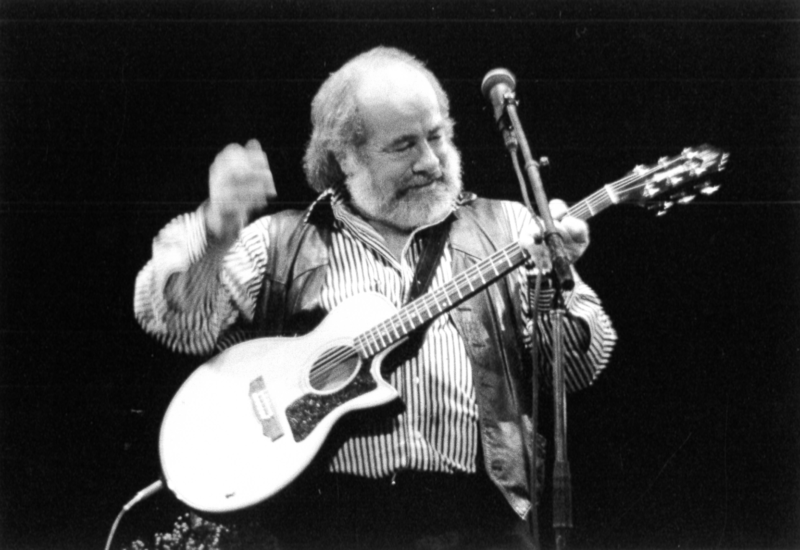 In a 1980 issue of Relix, Robert Hunter walked through the Dead’s “Greatest Hits” with Jeff Tamarkin. To celebrate the late songwriter’s birthday, we look back on that rare peek behind the curtain.

TRUCKIN’: I wrote that in several different cities, starting off in San Francisco. I finished it up in Florida. I was on the road with the band and writing different verses in different cities and when we were in Florida, I went outside and everybody was sitting around the swimming pool. I had finally finished the lyrics, so I brought them down and the boys picked up their guitars, sat down and wrote some rock-and-roll changes behind it. The bust in New Orleans which I wrote about had happened about a year earlier. There were no lyrical changes after the song got to the band. It was fed to Bobby a line at a time when we got to the studio, with me telling him how to pronounce it. He’d go in and put a line down, then go back in and work out how to pronounce the next line. That’s the one and only time such a thing has happened. The music was always like a Chuck Berry thing; they did it a little differently than I wrote it, put a different accent on it. The “sometimes the lights all shinin’ on me” part is definitely Grateful Dead.

CASEY JONES: I was working on songs for the Workingman’s Dead album, and I had written down in my notebook: “Driving that train, high on cocaine, Casey Jones you’d better watch your speed.” I thought that was very, very funny. I didn’t think of it as a song or anything else, and just went on writing other songs. Some time later, I came back to it, and thought there might be a song there.  We were working it out, playing it for Stills and Crosby, just jamming on it, and then we decided to record it. Then a question about the word cocaine came up. This was a time when this was still a very risky word, as was goddamn in “Uncle John’s Band.” I said, “Give me some time to think about it,” and I tried to write other concepts. I wrote, “Drivin’ that train, whippin’ that chain.” No. “Luggin’ propane.” No. I tried any way to get away from it and there just was no way. That was the line for the song, and it had to go in.

DARK STAR: That was the first song I wrote with the Grateful Dead. We were down in Rio Nido [Calif., in September 1967] and I heard them playing it in the hall they were about to play. I just started scratching ideas on paper and got the “Dark star crashes, pouring its light into ashes” part and I said, “Why don’t you try this with it?” It worked well and then they wanted more verses. I finished up the second set of verses back in San Francisco. I got up—I was staying at 710 Ashbury— one morning fairly early, about 10:30 or 11, and stumbled over to the Panhandle at Golden Gate Park. I was sitting there, getting stuck on a verse, when along came a hippie who handed me a joint. He asked me what I was doing and I said I was writing a song called “Dark Star.” He said, “Oh.” That’s pretty much the story.

ST. STEPHEN: I had been working on this a long time before I gave it to the Grateful Dead, before I took off for New Mexico, which is where I originally sent them the lyrics from. I don’t know what to say about this song except that it was very important to me. It seemed to be saying oodles. It’s still one of my favorites. I didn’t know who the real St. Stephen was until after I wrote it. He turned out to be the first Christian monk or something.

UNCLE JOHN’S BAND: The band had already been working on the music and they asked me to score it. The first thing I came up with was “Goddamn, Uncle John’s Band,” but I thought I could come up with something more universal than that. It eventually worked out to become “Uncle John’s Band.”

FRIEND OF THE DEVIL: I was playing bass with the New Riders, although I never did actually get to the stage with them. We were sitting around practicing one night and I had “Friend of the Devil” more or less already written. I said “Try this out,” and David Nelson and John Dawson helped by smoothing out some of the rough changes. I still have the recording of that evening and it’s not that different. Then, we went down to get some coffee and Marmaduke said, “It’s a real good song but it has that one repeating line.” The line was, “It looks like water but it tastes like wine,” and he asked me if I could get anything punchier. I said, “I got it” and came out with “A friend of the devil is a friend of mine.” He said, “You got it; that’s it.” So I took the tape back to the Larkspur house where the Riders were staying. When I got up the next morning, I heard Garcia listening to the tape. He had that funny look in his eye. The next thing you know, he’d written a bridge for it, the “Anne Marie” part. Before that, it was the same melody all the way through. The next thing I knew, the Grateful Dead had snatched it up, much to the New Riders’ dismay.

DIRE WOLF: The imagery occurred to me in a dream. I woke up and grabbed a pencil, before I was entirely awake, and wrote the whole song down. I think I managed to capture the quality of the dream by writing it down before I was wide awake.

PLAYING IN THE BAND: That was written the same day as “Greatest Story Ever Told,” which was written to the sound of a pump, by the way. Mickey had a beat for it and laid down some rhythm tracks, then asked me to write some lyrics for it. I wrote the lyrics, then Weir came around and wrote a guitar part for it. I wasn’t certain it was going to be a Grateful Dead song; I just thought it would end up on Mickey’s Rolling Thunder album [where it’s called “The Main Ten”].

COSMIC CHARLIE: That was done during a burst of songwriting when we were actually sitting down together saying, “OK, let’s write some songs.” It’s very psychedelic.

BOX OF RAIN: Phil was going through a hard time at that point because his father was dying. He had written a set of changes out and wanted me to get the lyrics done quickly so he could sing it for his father. That was one of the rare times I wrote a song in one sitting; I wrote it in about half an hour and didn’t go back to scratch out a line or anything. The melody couldn’t be improved on, as far as I’m concerned. That is just about my favorite song I’ve written for the Dead.

U.S. BLUES: I originally wrote it for the song which became Weir’s “One More Saturday Night.” He took the lyrics and wrote some rock-and-roll changes behind them, and then he decided to rewrite the lyrics. This was well and fine, but then he asked me if he could use the title “United States Blues.” I said, “No, man, that’s mine.” So he called his song “One More Saturday Night” and I took the title “United States Blues” and rewrote it again. And I gave it to Jerry this time.

This article originally appeared in the December 2019 issue of Relix, which paid tribute to the life and work of Robert Hunter. For more features, interviews, and exclusive content subscribe below to receive this issue as your first.