One day in 2014, The Antlers frontman Peter Silberman found himself living what is surely one of every musician’s worst nightmare—his left ear just went kaput.

“When it happened, it felt super random,” he recalls. “I wasn’t able to get explanations from doctors as to what might have caused it. They could tell me what happened, but it wasn’t really clear why it happened. The general advice after it happened was to reduce stress and protect my hearing. The fact that it recovered to the degree that it did is pretty rare, but I’m very grateful for it.”

Like a lot of profound events, this moment of massive uncertainty was a major driving force behind Silberman’s rerouting of his future and, subsequently, how he makes music. He left his longtime home of Brooklyn, N.Y., where he had lived since his early 20s—when The Antlers became indie sensations after the release of 2009’s Hospice. He felt that the nonstop noise and the city-that-never-sleeps mentality had become more of a hindrance than an asset, so he relocated to upstate New York, about 20 minutes from Woodstock.

The lush, quiet setting was exactly the kind of space that he needed to recover and help begin a new chapter in his music. Silberman started working on a solo record, which became 2017’s Impermanence, a short six-song album that explored this detrimental condition. But the project’s support tour actually led to the discovery of another health issue.

“I had a lesion on one of my vocal chords,” he says. “When the touring for that ended, I took some real time off— stopped writing music, stopped playing music. I saw some doctors and figured out what was wrong. I got it taken care of—had laser surgery to get it removed. I had to relearn how to sing and how to do diaphragmatic breathing.”

All of this is to say that The Antlers’ return seemed a bit doomed. Both 2010’s Burst Apart and 2014’s Familiars relied heavily on a “wall of sound” approach, where noisy psychedelics co-existed with Silberman’s melodic voice.

Silberman quickly realized that his proven method was no longer attainable and that the path forward—while clearer than the random morning when his hearing was suddenly shot—still wasn’t all that clear.

“At that time, I took them as signs that I needed to change things,” he says. “It’s just taken a while to figure out how to return and how to pick up where I left off. So much time has passed. And this feeling of doubt is the worst thing that could have happened. In the reevaluation process, you’re questioning the whole purpose. You’re questioning writing songs—wondering why you should make albums. Those are good questions to ask, but it became an obstruction for me.

All of this set the stage for the band’s comeback album, Green to Gold—a record full of perseverance that forced Silberman and his longtime collaborator, drummer Michael Lerner, to experiment with a much-needed fresh approach to accommodate their new reality. However, just as he had finally recovered from the debilitating hearing problem that threatened his future, Silberman found himself facing another unexpected obstacle—writer’s block. Silberman says he was stuck from mid-2016 to late-2017; the struggle led to an identity crisis that crept into his ability to produce just about anything.

“If you’re a naturally neurotic person, a doubtful person or even just a good editor, then all that can actually halt your flow of ideas,” he says. “If you’re a person who spends a lot of time working things out in your head, you tend to judge an idea before it has a chance to reveal itself. A lot of ideas don’t start out being good; it’s just raw material to mold into something better. I tried to just embrace everything and anything: chord progressions, melodies. A lot of times, it was about finding the path of least resistance. I wanted to find what works for my voice and figure out where it naturally wants to go. And if it didn’t reach the intensity or the past heights, that was OK.”

Upon retreating to upstate New York, Silberman turned his garage into a studio—home recordings have always been his thing, but his new space was more than just some amps and a laptop. He built a proper studio and started to overcome his writer’s block by channeling a mantra that challenged his earlier ways of thinking about songwriting.

“I think a part of it for me is treating [writing] like a practice and making it a daily habit,” he says. “I don’t have to wait for ‘inspiration.’ When I was younger, I wouldn’t try to write unless I felt that ‘pull of inspiration.’ I wanted to see what music came out of this feeling. I think that resulted in some good stuff. But, at this point, it’s more useful for me, each morning, to just show up and see what ideas might be there. Sometimes that starting point isn’t divinely inspired— but it’s something on the canvas. And something divine can still be put on top of that. I’m trying to just stay in the habit of working on music every day and practicing music every day. If I get lucky then some sort of feeling may accompany it. But that’s not always the starting point.”

The mood on Green to Gold is what Silberman likens to a “Sunday morning” album, which is also an apt description of where The Antlers are at this point in their career. That concept was what he said was the “initial prompt” at the onset.

“Before I start working on an album, I have an idea like that in mind,” he says. “Before it becomes a concept, I’m like, ‘What do I want the mood to be?’ I always think in terms of time of day, or seasons, and I think that’s how I’ve often consumed music in my life. There’s music I listen to in the winter and music I listen to in the summer. There are things I listen to first thing in the morning and things I listen to at night. Music fills those different categories for me. With this one I thought, ‘I don’t think I’ve made a morning record—a sunny sounding record.’ I didn’t even know what that would look like.”

“More and more over the years, we’ve been moving away from loud music,” Lerner adds. “That just came out naturally [this time].”

But Sunday mornings can also signal more than just a mood: It’s the start of something fresh, a new week, a new beginning. There’s a transition from the old into the new, where daybreak is the start of a new path. Silberman was certainly in that mindset with everything going on in his life—the challenge in creating something he’s never heard before was there, but the stakes were higher. The Antlers were being reborn, though both their ability to be loud and their ability to play loud, in front of an audience, were now gone.

Green to Gold kicks off with “Strawflower,” a melodic instrumental that sets the tone for the rest of the album. It slowly builds, never truly exploding; instead, there’s beauty in the restraint, where it’s easier to lock into a mellow tempo, rather than waiting for any dramatic shifts. The melodic guitar lines of “Wheels Roll Home” and “Volunteer” mix with Silberman’s voice, showcasing a tender guy who’s grateful. The songs themselves seem to echo that theme— going home, overcoming stubbornness, transitioning from one season to the next, leaving behind the old as a natural way of shedding the past. The record’s mood celebrates these transitions, warts and all, leaving listeners with a sense of calmness. Hospice was about a terminally ill cancer patient letting go of life. Green to Gold is about grabbing hold of life and embracing its joy—fading memories and present days comingling together into songs of movement and stillness, all at once.

In 2019, The Antlers announced a 10th anniversary tour for Hospice, where the group played their breakthrough record in its entirely. But, because of Silberman’s health concerns around his hearing, The Antlers had to present a more stripped-down version of the LP. The venues they chose were smaller and more intimate than the early days—but they needed something quieter and that was the logical choice. However, the success of those live dates gave them the confidence that new directions can be creatively fulfilling for the mind and soul.

The attention that Hospice received when it was first released was a big surprise to Silberman, who relocated to New York City after first enrolling at Saratoga Springs, N.Y.’s Skidmore College. He took a semester off and then transferred to NYU, recording The Antlers’ first album in his apartment. The Brooklyn music scene was vibrant, with bands like The National and Grizzly Bear starting to find a worldwide audience. The Antlers were an overnight success story, essentially, that brought them heapings of praise and changed the course of their lives forever.

“I’m still processing it, to be honest,” Silberman says of that time. “I still feel like I experienced a lifetime of a career in just a couple of years. There’s this period of time, 2009-2011, where something new would happen seemingly every week that made life seem more and more unreal. I think I was in a state of disbelief for a lot of it. I was toiling in obscurity for a few years, not expecting things to take off, and they suddenly did. And I wasn’t prepared for it. I tried to embrace it, but I wasn’t prepared for it. I hit these career landmarks that I had way earlier than I expected. And then I didn’t know what my goals were anymore. So I let it just take me. And then, at some point, because I did not have a clear sense of what my ambitions were and what my expectations were, I started to burn out. And following the wrong influences and forces in my life contributed to that burnout. All of that led me to take a step back and evaluate things for a couple of years. I’m still kind of doing that.”

Green to Gold is a culmination of that notion of stepping back—and really everything that the band has been through since those Hospice days. It’s rebirth and reinvention, with no expectations about the future. Both Silberman and Lerner are devout meditators. When speaking, they gravitate toward a fondness of simplicity— they think of it as a rewarding quality, rather than something that comes easy.

“My work habits are a lot better,” Silberman says. “I’m able to take care of myself. Being close to nature is good for me, and it’s good for my music. I have a good core of people up here; it’s a very supportive place. I’ve really started to appreciate silence. Things move more slowly. I tried to just embrace whatever— chord progressions, melodies and, a lot of times, it was about finding the paths of least resistance. It’s about not worrying about something being too simple or common or familiar sounding. It’s also about not trying to make things more complex for the sake of complexity. It’s about saying, ‘You know what—this sounds nice. And it works.’ There’s a kind of effortlessness to that. And, this time, I gave myself permission to do that.” 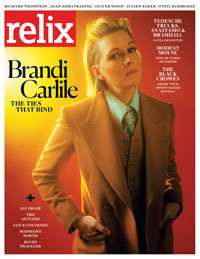