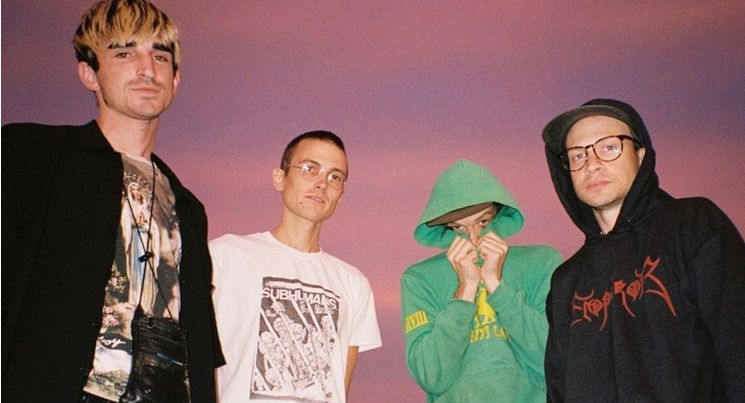 Deceiver, their third LP, is a tidal wave of slow-core ruminations and shoegaze distortion that finds singer/ guitarist Zachary Cole Smith surveying the planet’s demise and his own recovery after a well-publicized battle with drug addiction. But those cathartic songs helped the frontman chart a clear path forward.

“I’ve gained a lot of clarity in the distance I’ve had from active addiction—the shitty times I’ve had in my life and the shitty times we’ve had as a band,” he says, brushing off the suggestion that these songs, played onstage, might serve as reminders of a more painful period. “Mostly it’s trying to communicate lessons from that time, rather than living in it or revisiting it for the sake of itself.”

It’s impossible to tiptoe around the substance abuse narrative that’s dominated the press cycles throughout the band’s career. Smith, a Brooklyn indie-rock journeyman, formed the first iteration of DIIV—then called Dive—in 2011, and his shimmering, guitar-driven dream-pop captured an instant audience with their debut LP, 2012’s Oshin. But a dark cloud soon hovered over the band: The following year, Smith and his then-girlfriend, singer Sky Ferreira, were arrested after heroin and ecstasy were reportedly found in his van; original drummer Colby Hewitt quit in 2015; and bassist Devin Ruben Perez, who left the lineup in 2017, was discovered to have made offensive comments on the website 4chan.

The band’s long-awaited second record gestated during that stretch, emerging in 2016 as Is the Is Are—a more hi-fi and somewhat optimistic song cycle that drew on Smith’s recovery. But in real life, the dark cycle continued: After canceling a stretch of tour dates due to what band reps called an “urgent health issue,” Smith checked himself into a long-term inpatient program in 2017—leading to stints in rehab and a sober living house.

With all that drama in the band’s collective past, it’s only natural that Deceiver hits harder than their previous work—full of sculpted fuzz, mammoth dynamic shifts and woozy tremolo bar dives that recall the majesty of My Bloody Valentine. The thematic heaviness seemed to breed sonic heaviness: “I think it definitely did,” Smith confirms. “To match a lot of the lyrical themes, I think the music had to meet it halfway, so they work together. I’m sure there’s a relation there.”

Much credit goes to coproducer/engineer Sonny Diperri, who helped the quartet—Smith, guitarist Andrew Bailey, bassist Colin Caulfield, drummer Ben Newman—zero in on maximizing the “sound of a four-piece rock band.”

“We’ve been called a ‘shoegaze band’ ever since the beginning, and I don’t ever feel like it fit us,” Smith says. “The more we worked on the songs, the more we got feelings and textures from certain shoegaze bands that we loved. And we wanted to bring those [ideas] in for emphasis on parts. In the middle of working on the record, Sonny got the call to go out to Ireland and work with My Bloody Valentine. So he had a pretty intimate knowledge of how the album they were working on was made and how their previous records were made. He taught us a couple things that MBV does for some of their textures. It’s a small part of the record— we didn’t lean on it too hard. We just tried to use it where it made sense.”

Smith also chalks up that dark descent to a 2018 tour with post-metal act Deafheaven, during which they experimented with new material before entering the studio. “Deafheaven were big influences on the way we approached stuff,” he says. “We were trying out slower tempos live. A lot of our references were slowcore bands that we all love, including ‘90s stuff like Bedhead and Red House Painters and Duster. Though some of those slower tempos are difficult to adjust to, they gave us more freedom to write the songs we wanted to write.”

The word “freedom” is key. Deceiver is the first DIIV album credited to the full band, rather than Smith alone—and they relied on that collaborative spirit during the writing sessions. Everyone swapped influences and reference points, focusing and pruning back the arrangements, even chiming in with occasional edits or suggestions to Smith’s words in a Google document.

The lyrics, which arrived during the final writing stage, focus on deception and “personal responsibility”— raging against climate change deniers (the apocalyptic postpunk surge of “Blankenship”) and reflecting on “youthful sins” (the feedback-laced crawl of “Lorelei”). For Smith, it could have been a bit weird to give up that creative control. But, in a clear sign that he’s newly focus after a time in rehab, the DIIV frontman quickly embraced the opportunity to reapproach the project. “We’d already developed a very productive dynamic for how to speak to each other,” he says. “It was awkward the first time, like, ‘Welp, here’s the lyrics I’m thinking. Read my fucking diary.’ But everybody’s input was helpful.”

For DIIV, the collaborative process was about more than music—it’s the fresh start for a band that likely would have fallen apart without one. “I feel like it was just one facet of a bunch of shit we did as far as maturing into a real, functioning band that was long overdue,” says Bailey.

“We got into a good rhythm,” Smith adds. “I’d love to see it go even further.”