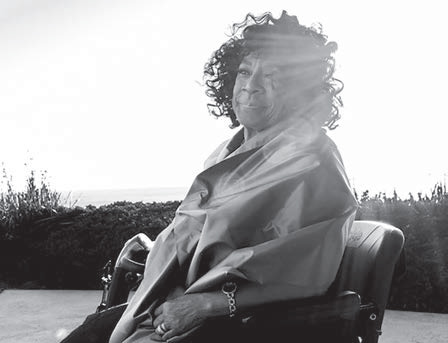 Merry Clayton embodies the 20 Feet From Stardom ethos—in fact, the soul siren was even a focal point in that Oscar and Grammy-winning documentary. The legendary singer, who released five blazing albums throughout the ‘70s, has worked with Neil Young, Leon Russell, Elvis Presley, The Rolling Stones, Bob Dylan, Joe Cocker and dozens more. She counts Aretha Franklin as a mentor.

When asked to recall her favorite experiences from a lifetime full of unbelievable musical tales, Clayton’s response is pitch-perfect: “Oh, honey. I remember everything.”

She’s not exaggerating. Clayton can not only name the exact date she was hired by Ray Charles to join his back-up singer ensemble, The Raelettes— March 23, 1966— but also what she wore that fateful day. She recalls breezy interactions with legendary actors and musicians from the ‘60s and ‘70s like they happened this morning. Merry Clayton is a living, breathing encyclopedia of music history.

Clayton, who is now 72, released her latest solo album in early April: Beautiful Scars, a gospel-soul record helmed by a dear friend, the 87-year[1]old iconic producer Lou Adler, in the wake of a car accident that nearly took her life. The record includes songs written just for her by a whole litany of her friends and fans: Diane Warren, Terry Young and Coldplay’s Chris Martin.

And the album title is literal—Clayton lost her legs in that catastrophic 2014 accident, and required months of hospital care, rehabilitation and medical attention before she could perform again. Beautiful Scars is the sound of a soul music icon spinning red-hot pain and devastation into a celebration of life through the power of faith.

“If I can come through what I have—and honey, I’ve come through a lot—then you can, too,” she says from her Los Angeles home. “It could be anything in your life that wasn’t as beautiful as you hoped. But you find beauty in it because you learn something. And it’s the goodness, the grace and the mercy of God that brought me through.”

Clayton grew up in her father’s New Orleans church; she remembers him welcoming Dr. Martin Luther King, Jr. to host meetings there. But, though she started singing in that house of worship as a child, her parents never limited her tastes to gospel. And, in 1962, she landed her first record contract after Bobby Darin picked her out of a choir of back-up singers.

“Bobby wanted to know whose voice was sticking out— he said it was a little bit too loud. So they told me to back up to blend in. But he kept hearing my voice,” she says, laughing. “By the end, I’d backed up so far I was nearly out the door of Capitol Records.”

“Oh, we saw Ray play whenever he was in town, and I’d always find my way to the edge of the stage. I’d look at the faces of his singers and think: I can do that,” she remembers. “I was doing homework after school one day and Billy called. He said, ‘Wear the cutest thing you have and come with me—Ray is going on tour, and we wanna be on it. So I went and sang for Ray. And I left with a contract. My mother talked to Ray and demanded: ‘When she comes back, she better come back just the way she left, or there’s gonna be a problem.’”

Looking back, Clayton says she returned from that tour a transformed person. She was 18 years old, learning from the best: “I had beautiful teachers before, amazing choir directors. But Ray Charles— he was a genius. There’s no skating around that.”

Rock bands took note. By the late ‘60s, Clayton was the go-to back-up singer for the biggest names in music, even appearing on The Rolling Stones’ “Gimme Shelter.”

But she never lost touch with her gospel roots. On tour, she’d find a church every Sunday, no matter the city.

“You can’t sing on tour and not give praise to God for giving you the strength to do so,” she says. “Didn’t matter how late I was out on a Saturday night; I was in church Sunday morning, singing in the choir.”

Beautiful Scars is Clayton’s first album in over 25 years—a deeply soulful collection of gospel classics and new cuts recorded with friends and family. “Love is a Mighty River” was penned by Martin, as a thank you to Clayton for singing on Coldplay’s 2015 “Up&Up,” which was her first session after leaving the hospital. When Clayton re-recorded “A Song For You”—the Leon Russell classic she first sang in 1971 with her late husband—producer Lou Adler added a gorgeous, surprise twist: he lifted Amy’s original saxophone solo.

“Lou sent me the finished song and asked my son to sit with me when we first listened. And when I heard that solo, I lost it. I just fell apart. But it lit a fire in my heart,” she says. “That was our song. And I gave it my whole heart and soul.”

The LP also features its own passing-of-the-torch moment: Clayton’s teenage granddaughter Kyliyah sings on “Ooh Child Medley,” a gospel-take on the 1970 hit.

“Of course I cried!” Clayton says between chuckles. “I don’t care if she sings one note, I’m in tears. She stepped into the soprano section and sung like a seasoned pro.”

The album centerpiece is its earth-shaking title track, which quickly proves that Clayton’s voice is still capable of reaching gale-force: “These are beautiful scars/ I’m grateful for each one of them/ I’m who I am because of them.”

But the strength to transform tragedy into triumph, Clayton says, comes only from God. And she fully believes that strength has supported her for 72 years—and given her gratitude every single day.

“When I wake up in the morning, I just give thanks,” she says. “A lot of us didn’t wake up this morning. So every day I’m allowed to stay here in the land of the living, I feel God’s presence.”