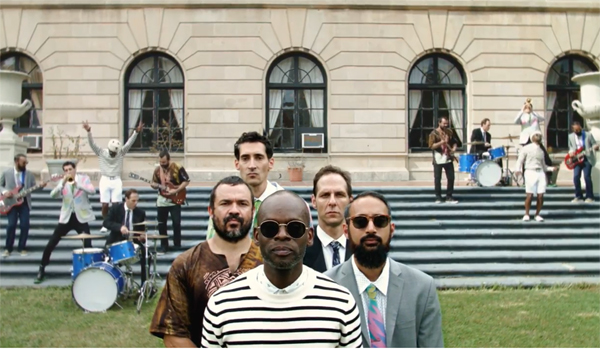 Over the next three months Brooklyn’s Directors will appear every second Thursday at NuBlu (151 Avenue C). On October 11, November 8 and December 13 the quintet will take the stage in partnership with FON Sound System. Directors features vocalist Sahr N’gaujah (Luke Cage and FELA! on Broadway), Jordan McLean (trumpet, keys, vocals), Amir Ziv (drums), Ricky Quiñones (guitar, vocals) and Nikhil P. Yerawadekar (bass, vocals). The five musicains have worked with Antibalas, John Zorn, Medeski Martin & Wood, Alicia Keys and many others. As we’ve previously written, “they harness their geographical and cultural influences of US, Puerto Rico, Israel, India, and Sierra Leone, and filter them through the punky, New-Wave-energy of the neighboring indie-rock scene.”

In anticipation of this residency, today we share a video for the group’s new track, “Ahead,” which is now available for download via the band’s store. Amir Ziv and Sahr Ngaujah collectively tell Relix that with this song “the band examines ideas about rebirth, untapped potential, and transmutation.”